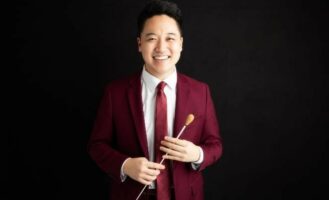 Daniel Cho is a Korean-American conductor and violinist based in Oregon, where he currently serves as the Conducting Fellow of the Eugene Symphony, as well as Assistant Conductor of the Oregon Mozart Players and Eugene Opera. In addition to his professional work, Daniel studies Orchestral Conducting as a Graduate Employee at the University of Oregon School of Music and Dance under the tutelage of Dr. David Jacobs. In 2020, Daniel launched a podcast that he hosts and produces called Con Fuoco. The objective of the podcast is to discuss the current state of the field of classical music and where it is headed in the future. Guests of the show have included violinist Alexi Kenney, award-winning author and historian Jan Swafford, President and Artistic Director of the Sphinx Organization Afa Dworkin, and acclaimed composer Jessie Montgomery.

Daniel began his journey as a conductor at the age of sixteen, when he was selected to be Assistant Conductor of the Napa Valley Youth Symphony, where he also served as concertmaster. He continued his music education with a Bachelor’s Degree in Violin Performance from New England Conservatory in Boston, MA and upon its completion in 2016, began a Master’s Degree in Conducting at the same institution in 2017. In 2018, Daniel was selected as a Conducting Fellow by the Vienna Summer Music Festival, studying with Maestros Christian Schulz, Wolfgang Scheidt, and Simeon Pironkoff and was chosen amongst fourteen conductors for an engagement with Ensemble PHACE, an acclaimed Vienna-based contemporary ensemble. During the same year, he attended the International Conducting Institute Czech Republic Workshop in Kroměříž, studying with Maestros Tomas Netopil, Neil Varon, and Tsung Yeh and led the Bohuslav Martinu Philharmonic in a performance at the Archbishop’s Palace.

When not making music, Daniel enjoys reading books on social psychology and history, watching comedy and horror films, and walking with his red golden retriever, Lucy.