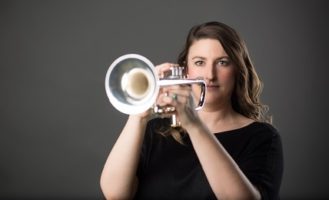 Sarah has performed with various chamber ensembles, broadway shows, jazz ensembles, alternative, funk and rock bands. Sarah has experience in Historically Informed Performance and has performed with the Oregon Bach Collegium as a cornetto and recorder soloist. Sarah studied Historically Informed Performance with members of Piffaro, The Renaissance Ensemble at Temple University in Philadelphia.

Under the Innova record label, she served as principal trumpet, producer, and manager for Kenji Bunch’s The Snow Queen, a full-length ballet co-commissioned by Orchestra Next and Eugene Ballet. Under Cantaloupe, you can hear her alongside trumpeter Joshua Silva, on the track titled Involuntary, for David Lang and Molly Barth’s album titled Thorn. She was a featured musician in Oregon Art Beat’s 2011 documentary titled “Marin Alsop returns to the Eugene Symphony”.

As co-founder of Orchestra Next- the resident orchestra with the Eugene Ballet Company, Sarah was involved with its initial concept to its full incorporation. As the Artistic Administrator, she serves as its librarian, personnel manager, operations manager, and oversees annual auditions for student members. Sarah also serves as an ex-officio board member for Orchestra Next.