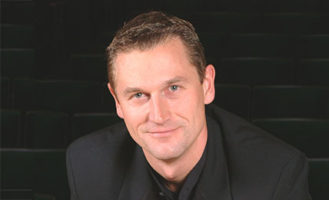 Sean Wagoner was a member of the Eugene Symphony percussion section from 1999 until his resignation due to medical reasons in 2020. He battled glioblastoma (a particularly aggressive form of brain cancer) until forgoing treatment to focus on maximizing his quality of life for the remainder of his journey. He passed peacefully on July 2, 2021. He is survived by his wife and two teenage children who ask that any memorial gifts be directed either to Pete Moore Hospice House or Relief Nursery.

During his time with Eugene Symphony, Wagoner was also Chair of the Orchestra Committee from 2013 until 2020. His positive and lasting impact on our organization through his steady and compassionate leadership cannot be overstated.

Wagoner held many other roles throughout the Eugene arts community, including principal timpanist of the Oregon Mozart Players chamber orchestra and principal percussionist of the Eugene Opera Orchestra. He was also an instructor of percussion studies at the University of Oregon, taught orchestration for music educators and music appreciation courses.

Wagoner received his Doctor of Musical Arts, master's, and bachelor's degrees in percussion performance from the University of Oregon, where he was a student of Charles Dowd.

His recording credits include: percussionist on the Grammy Award-winning Hännsler recording of Krzysztof Penderecki's Credo with Helmuth Rilling and the Oregon Bach Festival; drummer on the platinum-selling album Zoot Suit Riot: The Swingin' Hits of the Cherry Poppin' Daddies; percussionist for George Crumb's An Idyll for the Misbegotten and Iannis Xenakis' Persephassa for broadcast worldwide on WGBH Boston's Art of the States and Radioemisoras 96.5 FM "XIII Festival de Música Contemporánea" in Santiago, Chile.

As a composer and arranger, Wagoner published with TRN Music Publisher, Lorenz Corporation/Matrix Publishing, and received commissions from the Salem-Keizer Public Schools, Fresno State University, and the University of Oregon.