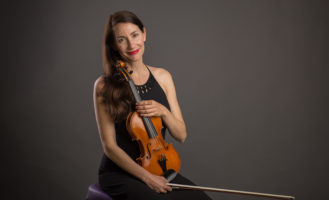 Alice Blankenship is a native of Eugene, Oregon, who earned degrees in music at the University of Oregon, the Royal Conservatory of Music in The Hague, The Netherlands, and San Francisco Conservatory of Music. She is the Concertmaster of the Oregon Mozart Players, and a violinist of the Eugene Symphony and the Oregon Bach Festival. Also a baroque violinist, Ms. Blankenship performs with period instrument ensembles such as the Oregon Bach Festival baroque orchestra, Portland Baroque Orchestra, Santa Fe Pro Musica, and Southern Oregon Repertory Singers.

As a soloist, Alice Blankenship will be featured in the 2017-2018 seasons of the Oregon Mozart Players with Bach’s Brandenburg Concerto No. 4, the Willamette Valley Symphony with Mozart’s Concerto No. 5 in A major, and the Salem Philharmonia Orchestra with Lalo’s Symphonie Espagnol. She has performed the Mendelssohn Violin Concerto with the WVS, and Vivaldi’s Four Seasons, Bach’s Brandenburg Concertos 1, 2, 3, 5, and Vaughan Williams’ The Lark Ascending with the Oregon Mozart Players.

Ms Blankenship has served as instructor of violin at the University of Oregon, the Oregon State University Summer Chamber Music Workshop, the West Cascades Fiddle Camp, the University of Oregon summer music camp, and maintains an active private studio in her home. Her students were featured performers for the opening ceremonies of the Oregon Bach Festival 2017, and have served many other community venues, including the Eugene Mission, the Carmelite nuns, Sheldon Park Assisted Living, the Relief Nursery, and Alpine Springs residential facility.

Alice lives in Eugene with her husband, clarinetist Michael Anderson, son Francis, and a flock of backyard ducks.