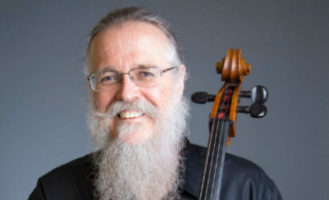 Dale Bradley, Cellist, Composer and Guitarist, is a Springfield native and a longtime member of the Eugene Symphony and the Oregon Mozart Players. A graduate of the University of Oregon School of Music, he studied cello with Robert Hladky. He began playing cello in the 4th grade and also began composing at this time, filling up small notebooks purchased from the local music store with musical ideas.

Dale’s compositions & arrangements have been played live in various venues on the west coast, from local retirement centers to the Los Angeles Philharmonic. His compositions have also been featured in concerts by the Symphony Connect string quartet, in which he has served as cellist. His teaching activities include beginning String Academy classes in local elementary schools, Rock Strings Camp (taught with Tracy Bonham) and a private studio where he teaches cello, bass & guitar.

Dale has played live and recorded with a wide variety of musicians. He continues to assist others in their recording projects, often arranging & producing in his home studio. His own CDs include “Solo”, “The Christmas Cello” and “Generations.”