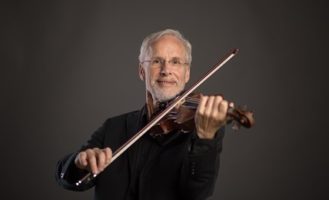 Dan Athearn began the violin at about age nine. He has performed with the Oregon Mozart Players, Eugene Opera Orchestra, Oregon Festival of American Music, and the Blue Heron String Quartet. He grew up in Butte, MT and Seattle in a musical family; his mother sang, composed, and played piano and his father was a church organist. He has a PhD in Philosophy from the University of Oregon. Some of Dan's favorite pieces are the second movement from the Octet for Wind Instruments by Stravinsky, Prokofiev's Romeo and Juliet ballet, and Schoenberg’s First String Quartet. His most memorable experience with the Eugene Symphony was performing Barber’s First Symphony with Marin Alsop at Portland's League of American Orchestras conference.

As a philosopher, Dan is known for his criticism of standard assumptions in physics.