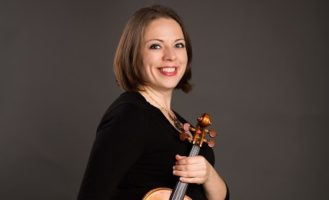 Jenny Estrin leads an active and diverse performing and teaching career. When she’s not performing as a classical violinist, Jenny moonlights as a fiddler in a folk band, does recording studio work, and teaches private lessons.

Ms. Estrin’s formal training began at Indiana University’s Young Violinist Program with Mimi Zweig, and she returned to Bloomington to attend the Jacobs School of Music as a masters student. When her studies were complete, she attended the Garth Newell Music Center as a fellowship recipient with a string quartet before relocating to Portland, Oregon where she began developing the varied performing and teaching career she enjoys today.

Currently, Jenny performs as a member of the first violin section of Eugene Symphony and Oregon Ballet Theatre, and she plays violin in the Portland Opera orchestra and subs with Oregon Symphony. Jenny was concertmaster of the Oregon Mahler Festival in 2015, principal second in the Eugene Concert Choir Orchestra for two seasons, and has been performing in the Astoria Music Festival since 2012.

Additionally, she has recorded a full-length album of Northwest folk music with Timberbound, a Northwest folk band, and contributed to the Roll Columbia project, an album of 26 Woody Guthrie songs that was released under the Smithsonian Folkways record label this year.

Jenny is also a long time music educator, and teaches through 45th Parallel, an organization that celebrates Northwest musicians and educators, and she maintains a private studio in Southeast Portland.