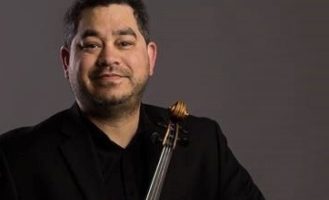 Stephen Chong is a member of the first violin section in the Eugene Symphony. The 2010-11 season marks his 17th season with the Symphony. He has played the violin for more than 30 years. He enjoys a variety of music; in the classical genre he enjoy Bach, Brahms, and Prokofiev. He also loves music from India and Africa as well as music from various American genres, including spirituals, blues, jazz, rock, and folk. He plays in several orchestras in the Northwest. Stephen graduated with a Bachelor of Music Degree from the University of Oregon. Growing up in Oregon, his family always supported his professional music career. His most memorable moment with the Eugene Symphony was playing Mahler’s Fifth Symphony and Brahms' Requiem under Marin Alsop. Outside of performing, Stephen enjoys eating, cooking, and making people laugh, especially while they are eating.