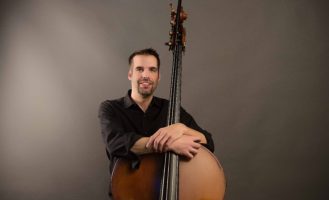 Tyler Abbott is an instructor of double bass, jazz bass, and music theory. He maintains an active performance schedule as an orchestral bassist, chamber musician, jazz bassist, clinician, and soloist, performing throughout the region and nation with some of the finest musicians in both the classical and jazz music worlds. He has recently performed with, or is a member of, the Eugene Symphony, Oregon Symphony, Aspen Festival Orchestra, Oregon Bach Festival, Spokane Symphony Orchestra, Oregon Festival of American Music’s “American Symphonia,” Eugene Opera Orchestra, Yakima Symphony Orchestra, Oregon Mozart Players, Salem Chamber Orchestra, and several other professional orchestras throughout the region and country. As a chamber musician, he has performed with the Oregon String Quartet, Pacifica Trio, Beta Collide, and Hundreth Monkey, a contemporary ensemble based in Eugene, of which he was co-director.