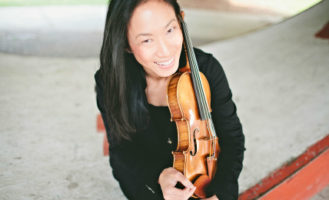 Yvonne Hsueh, a native of Los Angeles, currently residing in Eugene, Oregon, is Principal Second Violin of the Oregon Mozart Players in Eugene, member of the Eugene Symphony and the Sunriver Music Festival in Central Oregon

She has been the Concertmaster of the Newport Symphony and has performed with the Siletz Music Festival, Chintimini Festival and the New Hampshire Music Festival.

She is an active symphonic violinist, recitalist, chamber musician and soloist as well maintains a successful studio.

Ms. Hsueh received her B.M. and M.M. degrees in Violin Performance and Pedagogy from the University of Oregon. Her early pre-college training was at the Colburn School of Music (where she studied with Margaret Shimizu and Rick Schwabe); with studies including: California State University - Northridge (with Joseph Genualdi), and Meadowmount School of Music (Margaret Pardee), New York.