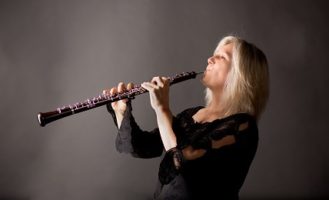 Cheryl Wefler regularly performs with the Eugene Symphony Orchestra, Oregon Mozart Players, Eugene Opera Orchestra, the Eugene Concert Choir, and other groups in Oregon. She has performed across the country in venues that have included Wolf Trap, Opera at John Jay College, Cathedral of St. John the Divine, Opera Saratoga, numerous IDRS conventions around the country, premiered a concerto written for her in Colorado, and also a sonata written for her in the UK. She is the owner/operator of Cascade Oboe Reeds and author of “Principles and Techniques of Oboe Reed Adjustment.” What excites her the most about her work is connecting with people, both in performance, and providing reeds for them to achieve their own musical goals.