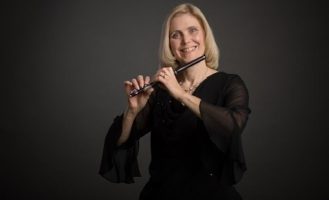 Jill Pauls has played flute and piccolo as a member the Eugene Symphony for nearly two decades. She is also principal flute of the Eugene Opera Orchestra, the Oregon Mozart Players, and the Corvallis-OSU Symphony and has made numerous appearances as a soloist with the later two ensembles.  Jill is a member of several chamber ensembles including Mozart’s Magic Flutes and the Arrieu Wind Quintet, which toured China in 2000. She earned Doctor of Musical Arts and Master of Music degrees from the University of Oregon, where she studied with Richard Trombley. She has studied with Trevor Wye in England and has performed in masterclasses for Jean-Pierre Rampal, James Galway, Geoffery Gilbert, John Solum, Julius Baker, Samuel Baron, Robert Dick, Harvey Sollberger, and many others. She twice performed at National Flute Association Conventions. Pauls has been the Instructor of Flute at Oregon State University for nearly 20 years. She also maintains a successful private studio out of which have come several students who have placed in the top five at the State Solo Competition.  Previously, she taught college students at the University of Oregon as a graduate teaching fellow. She enjoys spending time and making music with her husband Rod, son Joshua (pianist, percussionist), and daughter Andrea (cellist, pianist).