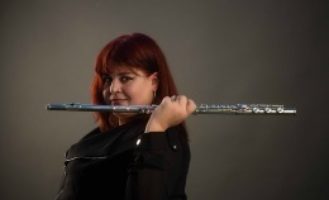 Kristen Halay is currently principal flutist with the Eugene Symphony. She also regularly performs with the the Oregon Symphony, Oregon Ballet, Oregon Bach Festival, the Cascade Festival of Music, Oregon Mozart Players, Eugene Opera, and the Oregon Festival of American Music. She has appeared as a soloist with over a dozen orchestras across the United States. Halay was the winner of the 1994 Lillian and Paul Petri Competition, and has been a fellow at the Aspen Music Festival. She initially studied flute with Joanne Tanner at the University of Massachusetts, and later with Richard Trombley at the University of Oregon.