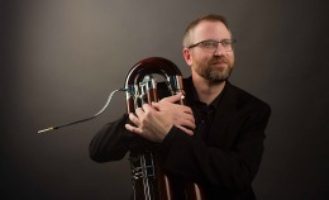 Since 2000, STEVE VACCHI has been professor of bassoon at the University of Oregon, where he also coordinates the chamber music program. His teachers have included C. Robert Reinert, Rebecca Eldredge, Matthew Ruggiero, K. David Van Hoesen, Stephen Maxym, Frank Morelli, and William Ludwig. He holds degrees in performance from the Eastman School of Music (B.M. with high distinction/Performer’s Certificate), The Hartt School (M.M.), and Louisiana State University (D.M.A.), where he held a Board of Regents Fellowship. He also studied at the Yale School of Music. His dissertation is a “how-to” for bassoonists on fluttertongue and singing while playing; it focuses on five solo works requiring both techniques. A member of Pi Kappa Lambda and Phi Kappa Phi, he was formerly a faculty member at Wichita State University (KS) and the Brevard Music Center (NC). He has presented masterclasses at high schools, conservatories, and universities throughout the United States and China, and served as a faculty sabbatical replacement at Indiana University's Jacobs School of Music.

An advocate of new music, Vacchi has performed 465 recently composed works, including 148 premieres. A member of the Oregon Wind Quintet, he also performs with Douglas Detrick’s AnyWhen Ensemble, which features contemporary improvisation and jazz-influenced chamber music. Vacchi maintains interests in instrument collecting and early music, performing on dulcian, rackett, Baroque, Classical, and French bassoons. He has performed on historical bassoons with ensembles throughout the west coast, including the Portland Baroque Orchestra, Oregon Bach Festival, Vancouver's Pacific Baroque Orchestra, and with members of Seattle Baroque.