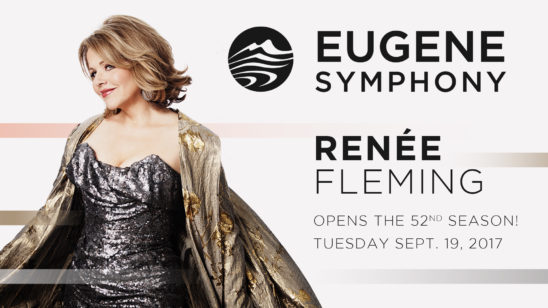 EUGENE, OR (Feb. 22, 2017)—The Eugene Symphony’s 2017/18 season opens with soprano Renée Fleming joining the orchestra at the Hult Center for the Performing Arts on Tuesday, September 19, 2017 at 7:30 p.m.  Tickets are currently available to full-season subscribers. They will be available to partial-season subscribers on May 9, and to the public on July 18.

Fleming made her Oregon debut to a sold-out crowd with Eugene Symphony in May 2007.

“Plans to bring Ms. Fleming back to Eugene have been in the works for three years,” says Eugene Symphony Executive Director Scott Freck. “We are so glad that the timing is now right and are thrilled for what will be a phenomenal opening of our next season.”

Fleming, affectionately known as “the people’s diva,” is one of the most beloved and celebrated musical ambassadors of our time. She captivates audiences with her sumptuous voice, consummate artistry, and compelling stage presence. This September, she will perform Samuel Barber’s luminous Knoxville: Summer of 1915 in addition to some of her favorites from opera and musical theater.

New Music Director The extensive search to identify the successor to Music Director Danail Rachev is nearing its end. The process began with a public announcement on February 26, 2016, after which Eugene Symphony Association received nearly 250 applicants from around the globe. Nine semi-finalists visited Eugene for interviews in July and August 2016 and three finalists have been critiqued throughout this 2016/17 season. The first, Dina Gilbert, is currently assistant conductor at the Orchestre symphonique de Montréal and conducted the orchestra on December 8, 2016. Ryan McAdams, a symphonic, operatic, and contemporary music conductor, followed on January 26, 2017. Francesco Lecce-Chong, Assistant Conductor of the Pittsburgh Symphony Orchestra, will conduct on March 16, 2017.

The Music Director Search Committee will convene after Lecce-Chong’s concert. Audience input from each of the three finalists’ concerts will be considered, along with feedback from the orchestra and Eugene Symphony Association Board of Directors, staff, and partnering organizations.

The Association expects to name the new Music Director in May 2017.

Imagine the sun and stars rotating around you as you listen to the opening of our 2017/18 season with Radiant Circles, the first of two works by Augusta Read Thomas* we premiere this year. Then, Beethoven’s concerto reveals tantalizing hints of the emerging genius in a musical selfie of the young composer, while Tchaikovsky’s most popular symphony overflows with fateful drama.

This eclectic program juxtaposes piano pyrotechnics with style and elegance. Mozart’s “Paris” is light and graceful in spirit. Ravel’s concerto, commissioned by a pianist who lost his right arm in World War I, is literally played with just the left hand! Liszt’s Totentanz is a dark and thrilling theme-and-variations for piano and orchestra. Prokofiev’s “Classical” Symphony concludes the evening with sophisticated music that has in-your-face humor and a modern twist.

20-year-old Seattle-born rising star violinist Simone Porter performs Paganini’s Violin Concerto No. 1, a work so virtuosic and stunning that your jaw may actually drop. We also perform Brahms’ sunny Serenade No. 2, a youthful precursor to his masterful symphonies, and Berlioz’ Roman Carnival Overture, one of his most brilliant orchestral works.

What better way to celebrate the holidays than with the most beloved oratorio ever written? Composed in just three weeks, Messiah showcases Handel’s gift for melody and drama. The Eugene Symphony Chorus joins the orchestra for the complete Messiah, featuring all your favorite arias and choruses. Hallelujah!

Take the chill out of January with Edvard Grieg’s majestic piano concerto, one of the most beloved concertos in the piano repertoire. We’ve paired it with Schubert’s expansive final Symphony No. 9, about which fellow composer Robert Schumann wrote, “It reveals to us something more than beautiful song, mere joy and sorrow…it leads us into regions which we had never before explored.”

*Vivaldi: The Four Seasons (with projected imagery of the McKenzie River)

Elgar: In the South

Violinist Rachel Barton Pine showcases her “bravura technique and soulful musicianship” (New York Times) with Vivaldi’s The Four Seasons, which we present with projected images* of the McKenzie River in each glorious season of the year. Our tribute to the beauty around us begins with Dvořák’s In Nature’s Realm and ends with Elgar’s In The South, a vividly colorful homage to the Italian countryside. *Submit your photos of the McKenzie River for possible use in this production. More info at eugenesymphony.org/Mckenzie4Seasons.

Ernest Hemingway’s greatest stories come to life in Michael Daugherty’s Tales of Hemingway, a new concerto for cello and orchestra in which each movement is inspired by a different novel. We’ve enhanced his passion for Spain with Rimsky-Korsakov’s Capriccio espagnol, which features signature Spanish rhythms and flavors, and with de Falla’s evocative Ritual Fire Dance from his ballet El Amor Brujo. Ravel’s Waltzes are full of subtlety and charm.

Trumpeting acclaim to the natural world, this concert opens with celebratory brass fanfare by Dukas. Then, we conclude our two-part collaboration with Augusta Read Thomas as Third Coast Percussion performs the West Coast premiere of Sonorous Earth, which features ceremonial bells from cultures all over the world. The expansive melodies of Hovhaness’ “Mysterious Mountain” draw musical outlines of rugged skylines, and Debussy’s La mer captures the essence of the ocean in all its ever-changing moods.

Our final concert of the season features Mahler’s monumental Fifth Symphony. This iconic work, with its characteristic mix of joy and upheaval, speaks to the uncertainties of our times. It also includes the exquisite Adagietto, a musical love letter to his wife that will touch your heart. We’ve paired Mahler’s masterpiece with Haydn’s Symphony No. 88, one of his most buoyant and popular symphonies.

Celebrate the holidays with the Eugene Symphony while watching astonishing feats of acrobatic wizardry on – and above – the stage. You’ll hear favorites like Sleigh Ride and music from The Nutcracker while the orchestra is surrounded by aerial flyers, contortionists, jugglers, and dancers. Bring the whole family!

About Eugene Symphony
Now in its 51st season, the Eugene Symphony is a nonprofit and 83-member orchestra based in Eugene, Oregon. It reaches more than 25,000 adults and children annually with live music performances. Recognized as a cornerstone of the performing arts in Oregon's southern Willamette Valley, Eugene Symphony pursues its mission of enriching lives through the power of music by presenting annual classical and pops concerts, as well as music education and community engagement programs, regularly commissioning and premiering new American works, and disseminating its performances via radio broadcasts and recordings.