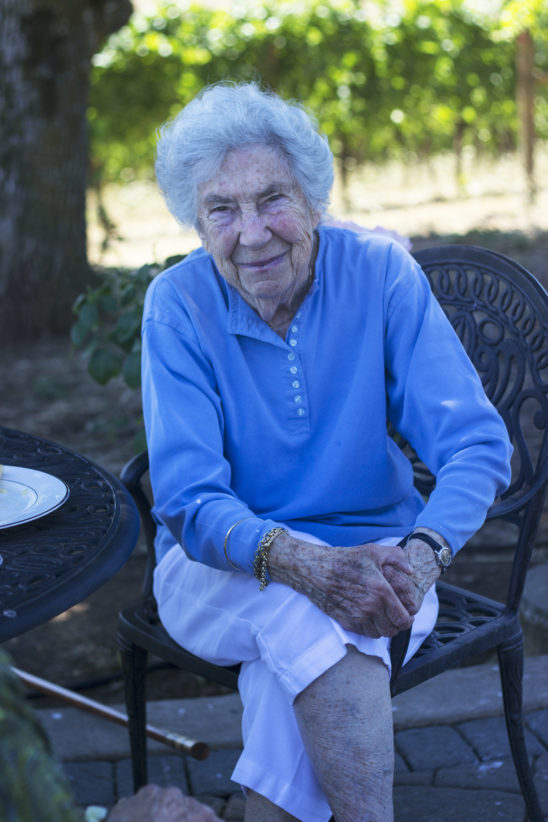 Photo by Pam Cressall, taken in July 2016 during Brunch with the Maestro at Sweet Cheeks Winery.

Caroline Boekelheide passed away earlier today at the age of 93.

It would be impossible to overstate Caroline’s importance to the Eugene Symphony over the course of its 52+ years of music and service. In fact, I can state unequivocally that what we know today would never have come to be without her passion and leadership in our earliest years, and all of the inspiration that she has given to so many of us ever since.

As we chronicled in the 50th anniversary season a couple of years ago, the Symphony was literally born in her living room – one of my favorite memories from that celebratory year was shooting some video of her walking around her house as she recalled the first conversation about founding the ensemble out of the then-Emerald Chamber Players, and pointed out where the woodwinds and strings were placed for the very first rehearsals. She played oboe and flute in that first group, and was the first Vice President of the Board of Directors. She continued to serve on the Board until 2013, a truly remarkable and unparalleled 47 years. Upon her retirement, the Board dedicated the Symphonic series concert on May 16, 2013 to her.

Caroline also helped to establish what would be become known as the Eugene Symphony Guild, organized many fundraisers, and attended hundreds of concerts and events. She embodied grace and dignity in everything she did.

Our thoughts and prayers are with her son Karl and his wife Linda and their children Amanda and David, her daughter Annie, and her son Eric, all of whom grew up with the Symphony in Caroline’s footsteps. In death she joins her beloved husband Virgil and sister Trish McGillivary who passed before her.

We will honor Caroline’s legacy at an upcoming concert later this spring, and will share those details as soon as they’re settled. In the meantime, please join me and our entire Eugene Symphony family in thanking and remembering Caroline, perhaps raising a glass of her favorite drink (champagne, of course!) as a tribute to her at our next opportunity together.