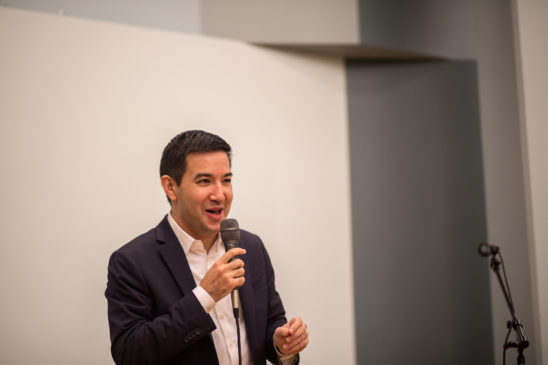 EUGENE, OR — Santa Rosa Symphony has announced Francesco Lecce-Chong as its fifth Music Director, beginning in the 2018/19 season. Lecce-Chong will maintain his position as Music Director & Conductor of Eugene Symphony, conducting 10 of the 12 concerts in Eugene’s upcoming 2018/19 season as planned. He will conduct the October, November, and January concerts in Santa Rosa’s 2018/19 season. He will be responsible for the artistic vision of both organizations, as well as programming upcoming seasons.

“Francesco’s appointment in Santa Rosa further corroborates what all of us in Eugene have come to know since he joined our organization last spring,” says Eugene Symphony Executive Director Scott Freck. “He is not only a phenomenal conductor but also a deeply genuine person who has an astonishing talent for bringing people together around shared experiences. We know that Francesco will achieve great success in this new opportunity and bring even more ideas and energy to his role here at Eugene Symphony.”

David Pottinger, President of the Eugene Symphony Association, added, “On behalf of the Board of Directors, staff, and musicians, we congratulate Francesco on his new appointment. Much like our own orchestra, Santa Rosa Symphony has a strong tradition of great music-making and community engagement, and we see this as a win-win for both organizations, and for Francesco himself.”

“I have loved every moment of my first season in Eugene,” Lecce-Chong added, “and am truly grateful for the immense support of the community. I look forward to continuing my work alongside our fantastic musicians and staff to build on our thrilling performances and community initiatives in the coming years.”

This summer, Lecce-Chong concludes his position as Associate Conductor of the Pittsburgh Symphony Orchestra and Principal Conductor of the Pittsburgh Youth Symphony Orchestra. The 30-year-old conductor has appeared with orchestras around the world, including the National, Atlanta, and Toronto symphony orchestras and Hong Kong Philharmonic. He is represented by IMG Artists, one of the premier global artist management firms, which represents artists such as vocalist Renée Fleming, violinist Joshua Bell and conductor André Previn. (Full bio here.)

About the Santa Rosa Symphony Music Director search
The Search Committee, composed of five board members, four orchestra members and the President and CEO, dedicated more than two years to the task, attending rehearsals and performances, poring over references and post-concert surveys from patrons and musicians, conducting candidate interviews and reviewing input from board members and staff. In October 2017, Lecce-Chong made an instant impression on musicians, patrons, Board and staff with his enthusiasm, talent, drive, warmth, professionalism and good humor.

"We chose Francesco because we found excellence, passion and dynamic style in his conducting, a background of superior training and broad musical knowledge, genuine sincerity and humility in his personality, and a respectful and collaborative interaction with our professional musicians," says Music Director Search Committee chairperson Jim Hinton.

The Search Committee’s recommendation to the SRS Board of Directors was unanimously and enthusiastically approved. To read more, visit Santa Rosa Symphony's website here.

Lecce-Chong will conduct three classical concert sets during Santa Rosa’s 2018/19 Season: October 6-8 season opening concerts, November 3-5 and January 12-14. He will assume a fuller presence with the Symphony in 2019/20. Now, widely recognized as a rising star in the orchestral world, he has subscription debuts with the Louisville Orchestra, the Louisiana Symphony and the Xi'An Symphony, among others, in the 2018/19 season.

About Eugene Symphony Now in its 52nd season, the Eugene Symphony is a nonprofit based in Eugene, Ore. Recognized as a cornerstone of the performing arts in Oregon's southern Willamette Valley, the Eugene Symphony pursues its mission of enriching lives through the power of music by presenting annual classical and pops concerts, as well as music education and community engagement programs, regularly commissioning and premiering new American works, and disseminating its performances via radio broadcasts and recordings.
###