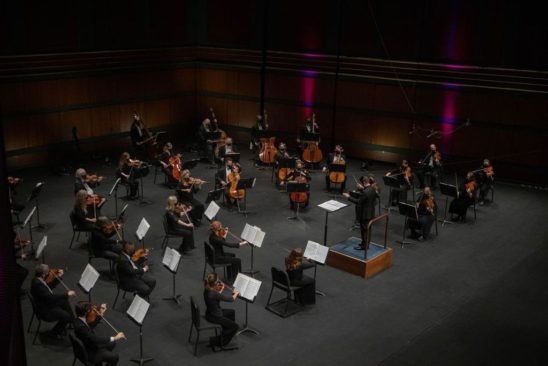 The centerpiece of Eugene Symphony’s pivot to online programming during the pandemic has been its Soundwaves series of virtual concerts. Initially featuring archived concert video from prior seasons, the series now features new concert recordings. With government allowance to return to the Hult Center for the Performing Arts in February, Eugene Symphony and Music Director & Conductor Francesco Lecce-Chong have been performing and recording in high-definition video and audio. Three remaining performance recordings will premiere online on April 1, May 6, and June 3.

“We learned so much during our first week back in the Hult Center about how to best utilize all the new cameras and technical gear,” says Executive Director Scott Freck. “As a direct result of these difficult times, we’ve essentially become a media production company, when before our focus was only on the live performance itself. Challenges are inevitable as we all navigate this new terrain, and I am proud of how our entire team, including Eugene Symphony and Hult Center staff along with outside partners, have taken them on head on and made these remarkable video programs that showcase the orchestra’s artistry to the community in a whole new way.”

Programs for the remaining Soundwaves concerts are listed below.

“My intention for these programs is to continue to find ways to showcase our talented string players and also to highlight living and lesser-known composers whose repertoire lends itself well to smaller ensembles,” says Music Director & Conductor Francesco Lecce-Chong. “Of course, we'll also have some of the major works for string orchestra like Dvořák's Serenade alongside even more popular works like Bernard Herrmann's iconic music from Psycho. Whatever the music, all of us are so thrilled to be back on stage together again, and these programs are a celebration of the creative spirit. We look forward to sharing our joy and hope for a brighter future with our amazing community!"

Soundwaves virtual concerts are accessible in the following ways:

When: Premiering at 7:00 p.m. PST on April 1, May 6, and June 3, 2021. Available for one week after premiere.
Where: eugenesymphony.org
Prices: Free; suggested donation of $15 per household

About Eugene Symphony: Now in its 55th season, the Eugene Symphony is a nonprofit and 83-member part-time orchestra based in Eugene, Oregon led by Music Director & Conductor Francesco Lecce-Chong with a mission of enriching lives through the power of music. While away from the concert hall since March 1, 2020, due to the COVID-19 pandemic, Eugene Symphony has been offering digital content through its virtual hub at eugenesymphony.org, including radio broadcasts, music education content, live chats with Maestro Lecce-Chong, and musician performances. In all, these virtual engagement activities have reached more than 60,000 people in Oregon, across the country, and around the world. More at eugenesymphony.org