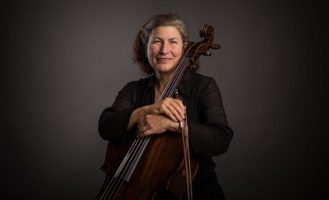 Ann Grabe is the principal cellist of both the Oregon Mozart Players the OSU/Corvallis Symphony, and she plays in the cello section with the Eugene Symphony. Ann currently has an active Suzuki cello studio in Corvallis, Oregon. Ann teaches cello at Oregon State University. She also performs with her cello quartet, named Cellophoria.

Ann received a Musikerziehung and Aufbaustudium Diplom from the Musikhochschule in Stuttgart, Germany, and a BA specializing in performance and Suzuki education from Ithaca College in New York. During her five years of studies in Germany she taught cello at two music schools and performed extensively.

Ann lived in Lyon, France for seven years. She taught at l’Institut Musical Suzuki de Lyon, which was housed in a centuries-old silk factory on the banks of the Rhône. While there she became the first recognized Teacher Trainer of Suzuki Cello in France. She founded their cello program. Ann taught teachers in France, Spain, Finland, Sweden, Scotland, and England. Ann is also a recognized Teacher Trainer by the Suzuki Association of the Americas.

Ann plays a cello built in 1752 by Jean Louvet, a renowned maker of lutes and hurdy-gurdies.