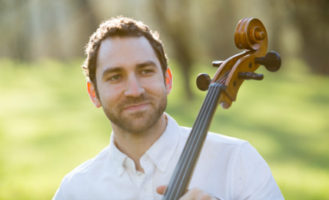 Eric Schatz Alterman has led a varied musical life that has spanned continents and genres. Cellist of the Oregon-based Delgani String Quartet, along with the Eugene Symphony and Oregon Mozart Players, Eric is frequently heard in performances around the region. From 2011-2016, he served as Assistant Principal Cellist in the Orquestra Sinfônica Brasileira, based in Rio de Janeiro. He was frequently featured in the orchestra’s chamber music series, including a solo performance of Benjamin Britten’s Suite No. 3 to commemorate the 100th anniversary of the composer’s birth. Other highlights included a solo appearance in the Rio International Cello Encounter, a recital of the Brahms Sonatas at the Federal University of Rio de Janeiro, and a solo recital of compositions by Jewish composers at the Midrash Cultural Center.

Eric grew up in New York City, where he began music studies at a young age at the Mannes College of Music. He continued his studies in the Boston area, where he earned degrees from Brandeis University and Boston University, as a student of former and current Lydian Quartet members, Rhonda Rider and Joshua Gordon, and the late Vermeer Quartet cellist, Marc Johnson. Eric has consistently explored and pursued other genres of music, since his college days, performing, arranging, and composing in an Arabic fusion ensemble. In Rio de Janeiro, he was a frequent performer of bossa nova at Copacabana’s famed music bar, Bip Bip, and appeared in orchestra performances with Brazilian greats such as Caetano Veloso, Milton Nascimento, Gilberto Gil, and Gal Costa.