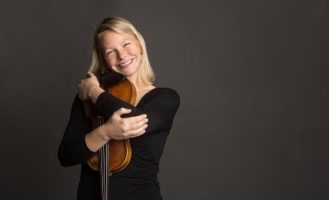 Julia has performed as a soloist, chamber musician and orchestral violinist throughout North America and Europe. A native of Eugene, she has been a member of the Eugene Symphony since 2015 and also performs regularly with the Oregon Mozart Players, Eugene Concert Orchestra, and Eugene Opera. Julia completed her Bachelor of Music at Rice University under the tutelage of Kenneth Goldsmith, and her Master of Music at the University of Maryland, College Park, where she studied with David Salness. Julia has participated in music festivals throughout the United States and Europe, including the Round Top International Festival-Institute, National Repertory Orchestra, and the AIMS Institute in Austria. Equally comfortable outside the realm of classical music, Julia has played fiddle since the age of five and regularly performs with country, rock, and hip hop groups throughout Oregon. In her free time, she enjoys hiking, running, and spending time with her dog and two cats.