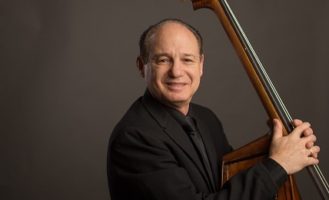 Nathan began his professional bass-playing career in 1972 at the age of seventeen, performing popular jazz music with jazz pianist Chuck Ruff and vocalist Donna Courtell. He completed his Bachelor of Music in Music Education degree at the University of Oregon in 1977. Nathan earned a Master of Arts in Music degree at California State University, Sacramento in 1982.

Nathan has had two seasons with the Reno Philharmonic, one season with the Sacramento Symphony, and one season as principal bassist for Sacramento's Camellia Symphony. Nathan has performed with the Oregon Bach Festival Orchestra, the Peter Britt Festival Orchestra, and the Oregon Festival of American Music Orchestra. Nathan is currently in his thirty-fourth season with the Eugene Symphony, having played with them from 1975 - 1977, and from 1987 to the present. Nathan's teacher is Larry Epstein, retired, long-time Assistant Principal of the San Francisco Symphony Orchestra.

Nathan has recently released his first CD Album, "I'll Think of Something." The album is in honor of Nathan's recently deceased father, songwriter-composer Charles Nathan, who penned the music to Perry Como's 1953 hit "Say You're Mine Again." The concerned CD's title track is from Charles Nathan's 2009 musical "Where the Heck's the Plot?" The album also includes "My Own Man," words and music by Greg Nathan. The album features jazz guitarist Mike Denny. In its review of the album, "LA Jazz Scene's" Scott Yanow said "I'll Think of Something" is, "a fun set of excellent jazz," Denny is a "world-class guitarist," and Nathan is "an excellent jazz bassist."

Nathan currently serves full-time as a guest teacher in the Eugene 4J and Springfield school districts. He recently became licensed to teach math, and is working towards a full-time math teaching position. Nathan is also a caring husband and father, and is an active member of his church.