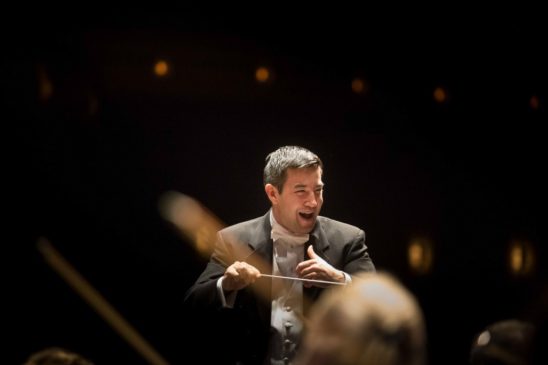 EUGENE, Ore. (April 26, 2017) – Following an extensive international search and acting on the recommendation of the Music Director Search Committee, the Eugene Symphony Association Board of Directors has named Francesco Lecce-Chong as Eugene Symphony’s new Music Director & Conductor, effective July 1, 2017 for a four-year term.

"It is truly a privilege and honor to join the Eugene Symphony with its rich history of artistic excellence and innovation,” says Lecce-Chong. “With the greatest excitement, I look forward to collaborating on vibrant performances with the orchestra’s talented musicians and working with the dedicated staff, board, and volunteers. Together, I am confident we will deliver and even expand on the orchestra’s mission of enriching lives through the power of music."

"Francesco will be one of our great ones,” says Roger Saydack, Chair of the Music Director Search Committee. “His combination of talent, personality and drive is one in a thousand."

“This search attracted a deep pool of incredibly talented conductors, further reinforcing the Eugene Symphony’s national recognition as a leading regional orchestra,” remarks Board President Matt Shapiro. “We believe Francesco will connect strongly with our community and we are excited for what the future holds.”

Beginning in March 2016, the Search Committee received more than 250 applications from candidates in 44 countries around the world, and 34 different US states, including nine applicants with ties to Oregon. After an exhaustive process, the committee narrowed the pool to nine semi-finalists who visited Eugene in the summer to meet with the Search Committee in person. Three finalists were selected – Dina Gilbert, Ryan McAdams, and Francesco Lecce-Chong, and each conducted the orchestra in concerts in December, January, and March, respectively.

During their time in Eugene, each finalist met with a wide range of constituencies including musicians, patrons, arts leaders, volunteers, and students. The 11-person Search Committee includes five musician representatives, four members of the Board of Directors, and two community representatives, including Chair Roger Saydack, a nationally renowned authority on such searches.

Lecce-Chong will begin his tenure as Music Director of Eugene Symphony by conducting the ninth annual Eugene Symphony in the Park, a free outdoor concert at Cuthbert Amphitheater in Eugene on Saturday, July 22, 2017. He will then conduct the orchestra at another free outdoor concert in Cottage Grove on Monday, July 24 followed by Roseburg on Tuesday, July 25. The first concert that Lecce-Chong will conduct on the orchestra’s ticketed 52nd season at the Hult Center for the Performing Arts is with Renée Fleming on Tuesday, September 19, 2017. He will then conduct seven of the nine Symphonic Series concerts in the 2017/18 season – September 28, October 19, December 7, February 15, March 15, April 19 and May 17.

For questions and interviews, please contact Marketing Director Lindsey McCarthy at or 541-687-9487 x106.

Now in its 51st season, the Eugene Symphony is a nonprofit based in Eugene, Ore. Recognized as a cornerstone of the performing arts in Oregon's southern Willamette Valley, the Eugene Symphony pursues its mission of enriching lives through the power of music by presenting annual classical and pops concerts, as well as music education and community engagement programs, regularly commissioning and premiering new American works, and disseminating its performances via radio broadcasts and recordings. For more information, please visit eugenesymphony.org.