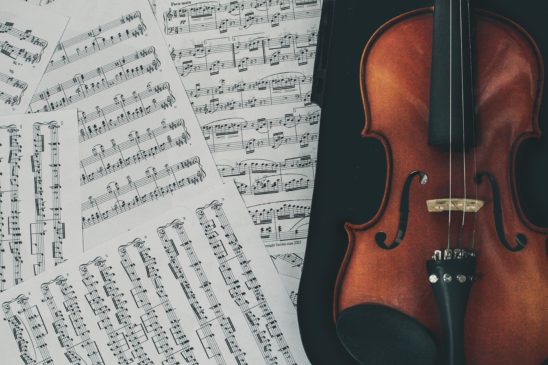 Concertmaster: The principal first violin. One of the most important duties of the concertmaster is to lead the process for determining the “bowings” of every piece performed by the orchestra. This is necessary to ensure uniform bowing among the string section.

It is also the concertmaster’s duty to ensure that the orchestra is properly tuned before the start of (and/or during) any rehearsal or performance.

Extras: Extra musicians are players that the Symphony hires when a particular piece on the program requires a larger orchestra than is presently under contract. For example, a Mahler Symphony often requires at least eight horn players. Therefore, since the Eugene Symphony only employs five horns on a contractual basis, it must hire four more horns on an “extra” basis, since one of the five horns is an assistant.

Extra musicians are also engaged as substitutes whenever a regular member of the orchestra becomes ill or for some other reason is not available to perform a particular service. They are also hired to increase the size of the string section for certain concerts.

Guest Conductors and Guest Soloists: Guest conductors and guest soloists are hired by the management under the direction of the Music Director. Many of these artists are managed by artist management firms.

Librarian: The person responsible for ordering, cataloging and distributing (in advance) all the music required for our performances. This music is either owned by the Symphony and stored in the library (generally music which is not in copyright and/or will be used frequently) or rented from publishing firms. In our organization, the librarian is often a member of the orchestra.

Music Director: Francesco Lecce-Chong, the Principal conductor of the orchestra responsible for the overall artistic direction of the Eugene Symphony. In addition to conducting, he/she is also involved in repertoire selection and the selection of guest artists and guest conductors.

Orchestra Committee: Five musicians elected annually by the orchestra to represent them in discussions with management concerning contractual and other matters.

Principal (or First Chair) Player: The duties of each principal varies according to his/her particular instrument. For example, the principal string players mark the bowings for their sections. The principal brass and woodwinds are often called upon to perform numerous solos in a given concert. And the principal percussionist must figure out who will play the particular percussion instruments called for in a given score.

Sideman: A term that originated in dance bands and is still used by the union to describe any musician who is not a principal, assistant principal or associate principal. In other locales these musicians are more commonly call “section” or “tutti” (ensemble) players.

Music historians have classified music into various periods, or eras. The periods most commonly associated with symphonic music are the following:

Baroque (1600 – 1750): The most notable composers of this period were Bach and Handel. Other composers include Telemann, Vivaldi, Couperin, and Corelli. For the most part, this music is not performed by large symphony orchestras because it was written for small orchestras of 10-20 members and because many of the instruments used by baroque composers are not found in the modern symphony orchestra (e.g., viola d’gamba, oboe d’amore, harpsichord).

Classical (1750 – 1810): This is the period of Mozart and Haydn among others. Early Beethoven is also considered classical. Classical music is highly structured, placing a great deal of emphasis on the form of composition. It was during the classical period that the “symphony” as a composition evolved.

Impressionist (1880 – 1920): This term refers to a relatively small amount of music composed in the late 19th century and early 20th predominately in France. The most notable composers were Debussy and Ravel.

20th Century (1900 – 1920): This music evolved in many directions during the 20th century, including modernist, post-modern, twelve-tone, atonal, neoclassical, and post-romantic styles.

Choral Work: A large symphonic works with chorus. There are some symphonies which have a part for a chorus (e.g., Beethoven No. 9, Mahler No. 2 and No. 3). There are also large works, such as the Verdi Requiem which orchestra regularly program on their series and which involve the use of a chorus.

Concerto: A work written for orchestra and soloist – usually comprised of three movements. Some movements contain a “cadenza” a section for the solo instrument unaccompanied by the orchestra. Cadenzas were often improvised by composers such as Mozart and Beethoven who played the solo parts in the premieres of their concertos. Today cadenzas are always composed in advance, occasionally by the soloist himself.

Movement: A section (or work within a work) of a symphony of concerto. The classical format for symphony and concerto movements is as follows:

Programming: The process of selecting the various compositions, guest conductors, and guest soloists for a given season.

Repertoire: Generally this refers to the entire corpus of the symphonic literature – in other words, the music that a symphony plays. However, the term repertoire also can refer to those works which a particular symphony can play with less than usual rehearsal time (since they have performed them many times and “know them”). Hence, these pieces are said to be in the “repertoire” of the symphony.

Symphony (composition): A work written for orchestra which is usually comprised of four movements.