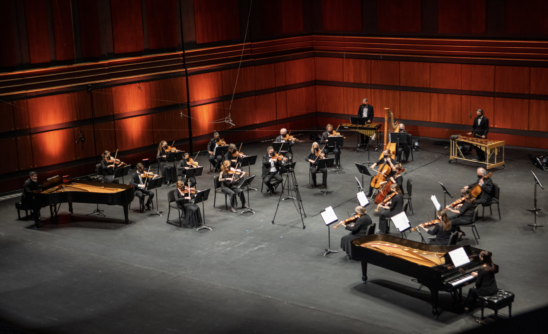 Eugene Symphony caps off its series of virtual concerts, Symphony Soundwaves, with its sixth installment premiering on Thursday, June 3. Recorded in high-definition video and audio at the Hult Center for the Performing Arts on Monday, May 17 and Thursday, May 20, this performance includes string, woodwind, brass, and percussion players using digital editing. A portion of the program also incorporates imagery of some of the area’s many outdoor murals, including a number which were created as part of the 20x21 Mural Project led by the City of Eugene Cultural Services Public Art program.

“The finale of the Soundwaves series highlights three hallmarks of the Eugene Symphony – supporting the talent of young artists at the start of their careers, collaborating with community partners, and embracing the intersection of music and other art forms,” says Music Director & Conductor Francesco Lecce-Chong, who conducts all the pieces on the program except for one. Conducting Fellow Daniel Cho, currently a graduate conducting student at the University of Oregon, takes the baton to conduct Chen Yi’s Shuo. “Daniel has been a vital part of the Eugene Symphony for the past two seasons and we are delighted to feature his debut with us on this season’s final program.”

Soundwaves VI will be accessible as follows:

What: Eugene Symphony’s Soundwaves VI
When: Premiering at 7:00 p.m. PST on June 3, 2021. Available for one week after premiere.
Where: eugenesymphony.org | Prices: Free; suggested donation of $15 per household

Program Notes by Francesco Lecce-Chong
“Chen Yi and Zhou Tian are two widely performed Chinese-American composers who also just happen to be two of my favorite musical creators working today. I first came across Zhou Tian through his Grammy nomination for his Concerto for Orchestra, written in 2016. I was instantly taken with the rich, bolds sounds of his orchestral writing and the unabashed intense lyricism. Even in his Nocturne, written for just the string section, there’s a beautiful directness and openness to his writing that brings the listener immediately into his sound world.

John Cage wrote his three Constructions between 1939 and 1942, all for various percussion ensembles. Cage is perhaps the most famous avant-garde composer of the 20th century – best known for his work, 4’33”, in which performances are completely silent. You can also travel to Germany to hear part of a performance of an organ work that will eventually take 639 years to complete! Cage’s Second Construction lies somewhere in the middle of those two extremes – perhaps that’s why he eventually came to dislike the work! However, it’s particularly fun for audiences to see four percussionists moving between several percussion instruments and a “prepared” piano (a piano altered in various ways to create unusual sounds) and the music finds its way into several delightful rhythmic grooves.

Just as adventurous and groundbreaking as Cage, Terry Riley was a pioneer in the minimalist movement of the 1950’s and 60’s and he continues to be an active performer today. His In C is the most famous work of minimalism and can be performed by any number of performers for nearly any length of time. Using a collection of 53 short musical fragments, performers are directed to repeat a fragment for however long they would like, before moving on to the next fragment. On top of a repeated “C”, a performer can move on or drop out at any point, but they are encouraged to stay within two fragments of each other so the music gradually, sometimes imperceptibly, changes over time. Much like From the Other Place which we included in our Soundwaves V program, the randomness described in the directions ultimately leads to an incredibly cohesive work of art that plays all sorts of games with a keen listener’s ear.

If Terry Riley’s In C is a piece constantly in motion, Vaughan Williams’ Fantasia on a Theme by Thomas Tallis could be considered glacial in comparison. But what a breathtakingly beautiful glacier at that! Using a melody by the 16th-century English composer of the title, Williams creates an enchanting sound by dividing the section into three groups: a string quartet and two separate string orchestras. The warmth and beauty of this work is a perfect way to close this most unusual and challenging season, and we look forward with great optimism to being back in the hall with all of you – our beloved audience! Thank you so much for joining us from home this season!”

About Symphony Soundwaves
The centerpiece of Eugene Symphony’s pivot to online programming during the pandemic has been a series of virtual concerts, Symphony Soundwaves. Initially featuring archived concert video from prior seasons, the series now features new concert recordings. With government allowance to return to the Hult Center for the Performing Arts in February 2021, Eugene Symphony and Music Director & Conductor Francesco Lecce-Chong have been performing and recording programs of small ensembles, including all-strings classics as well as works by living and lesser-known composers who often are not featured in traditional orchestral works. The recordings are in high-definition video and audio and disseminated through Eugene Symphony’s website and YouTube channel.

Now in its 55th season, the Eugene Symphony is a nonprofit and 83-member part-time orchestra based in Eugene, Oregon led by Music Director & Conductor Francesco Lecce-Chong with a mission of enriching lives through the power of music. While away from the concert hall since March 1, 2020, due to the COVID-19 pandemic, Eugene Symphony has been offering digital content through its virtual hub at eugenesymphony.org, including radio broadcasts, music education content, live chats with Maestro Lecce-Chong, and musician performances. In all, these virtual engagement activities have reached more than 60,000 people in Oregon, across the country, and around the world. More at eugenesymphony.org